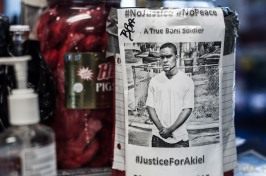 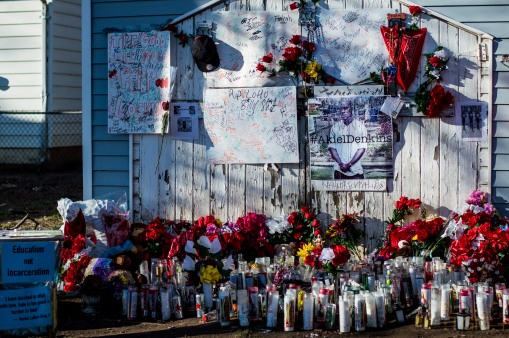 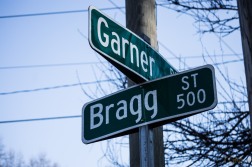 Footsteps. Dancing against the black pavement. Heavy breathing. The sound of cogs clicking. Thunder. Again. Again. Again. Again. Again. Again. A carcass hits the concrete. Gasp. Silence.  The victim’s name was Akiel Denkins and he was from Raleigh, North Carolina. The same Raleigh that I spent four years of high school. The same Raleigh where my old accomplices were still living. The same Raleigh. I left Charlotte to return to the city, choosing to skip out on studying for my Organic Chem 2 Exam. I wanted to be there, I felt like I needed to be there. I wanted to walk the same street and capture the after-effects of this tragic incident. I arrived too late, missing the protest march, instead being greeted with a makeshift shrine dedicated to the late father (did I mention he was a father?). From this moment, my wall of desensitization finally began to crumble like Jericho and I found myself hurt. Hurt for my people, hurt for the surviving family and hurt for my city.  I stood on Bragg street with my camera, unaware of what I was doing. I had no plans, a half-dead cell phone and a heart full of emotions I couldn’t begin to sort out. So I started to snap away, documenting the scene and exposing the elements that many would never see. I left the scene with a full memory card and a restless feeling stemming from my gut. It would take me another five months before I came to know that feeling. 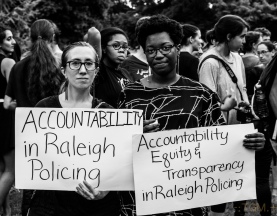 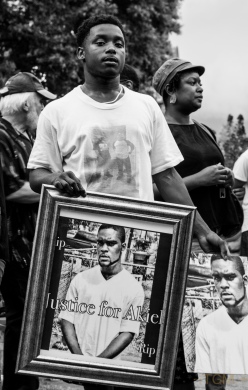 The park grass was trampled under the flip flops, boots and sneakers all converging on the patio. A hint of candle wax floated through the air and the tiny wisps of flames resembled dying embers. Bodies were packed together in a semicircle, with an opening in the center. Within this space stood a podium with a microphone that’s heard countless voices. Voices speaking out of frustration, voices that convert tears into chokes, and voices that are not yet audible. It’s been three days since the world watched Alton Sterling’s murder on their mobile devices. At 24 years old, the same age as Akiel, I attended my first rally and realized that I was no longer alone in my feelings. White men with tattered work pants, black college students with natural hair, and wide-eyed children all came together to listen to the activists speak. The mother and brother of Akiel Denkins stood at the side of the podium, clutching full-sized frames of his lasting image. Numbers were exchanged and daps were passed around after the speakers concluded their speeches.I realized that we all came out there to do one thing. To meet. 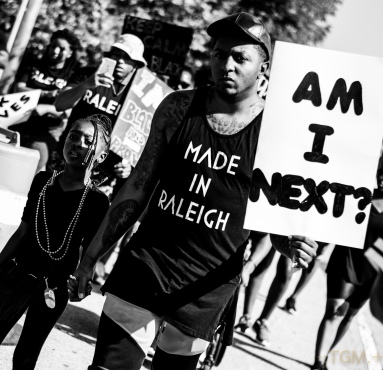 At 9:00 AM members of the Raleigh community stood on Rock Quarry Road with black shirts and picket signs in hand. They arrived for the “Walk For Justice” event hosted by The WhyL and Free Hype. The walk was led by Elliot Smalls, a native of the Raleigh area and co-founder of The WhyL. In this day and age we are quick to preach about change and downplay the importance of a protest; but when you’re stomping on the street, you are not alone. The strangers who march beside will become your allies. Allies who share a common mission become members of an organization. An organization is an organic construct capable of movement. A movement is able to cause a shift in stagnant situations. A shift in the situation is called change. As individuals we only have limited power; however if that small capacity power is combined with others, then the power level increases. Once we have a high enough level, then we will be prepared for the next challenge. My aim is to prepare the city for what’s next, because as we know, something is always coming next.

Cinema:the art of stimulating experiences that communicate ideas, stories, perceptions, feelings, beauty or atmosphere by the means of recorded or programmed moving images along with other sensory stimulations. For the last two weeks me and my partner, Robert “C.J.” Okwara, have been working on something. It started with just a random collection of  non-sequential clips, but then it became organized. Then sounds were added, along with transitions, titles and voices. Somehow out of the chaos we formed a video, coming in at seven minutes and fourteen seconds.

For nearly a year I’ve been sharing my visuals with viewers. Today I’m sharing my vision with you. Raleigh, this is just the beginning. If you have been slightly moved by this cinematic experience at all, then we have done our duty. If not, then we will improve for the next one and hope that you come back to see the progression. Regardless of your impressions, the film is complete; and today I stake my claim as a future director with this debut. Ladies and gentlemen, without further ado (wow, that sounds cool) I present “The Black Parade”.

One thought on “TGM: The Black Parade”